Influenced by the original series of Dragnet - Shields of Justice opens with a faux prologue, a opening narrative that leads into the main credits.

In order to contrast with the bright and bold sequence that follows, Tom and Ben wanted to have a darker seedier opening - a homage to The Sweeney and shows like Callan.

In this sequence Crash and Burn infiltrate the den of Drug Lord Bubba McBain - a violent kingpin who is in hiding with his gang of thugs.


The narrative called for quite a unique location, somewhere dark and menacing with winding corridors and enough space for the deal to go down.

Luckily for the Shields team, such a location existed just outside of Exeter - a WWII, ex RAF/Royal Observers bunker, in Poltimore.

The site is now being used by Urban Combat Zone as a paintball venue and UCZ very kindly agreed to let the Shields team use the building for their opening sequence.

'The Bunker', as the venue is called, is an amazing place, filled with interesting corridors, side rooms, stairs, doorways, not to mention rugged looking crates and air ducts. Every wall and surface has an interesting texture making it a delight to film in.

In fact, the hardest choice was picking which rooms not to use as every nook and cranny looked incredible.

The shoot was quickly populated by a gang of amazing actors, keen to look nasty and get beaten up in a variety of silly and amusing ways as Crash stealthed his way into the den.


Despite how cold it was, everyone kept their energy up throughout, trading blows as Burn's cover is blown and the deal goes south.

To make the already fantastic bunker look like it was populated by shady criminals hiding from the authorities, the set was littered with poker chips, playing cards, loose cash, cigarette ends and bottles of "Liberty Lightning" and "Bandito Bastardo" beer.

As usual, the team made sure that there were no licensed products in shot and got to work making fake brands to be seen in shot.

Ben knocked up some packets of 'liberty smokes' and Tom created the labels for some bottles of beer.


All in all the bunker shoot was a great day in a fabulous location!


Look out for the Behind the Scenes video for the Bunker shoot, coming soon...
Posted by Shields Of Justice at 04:48 No comments: 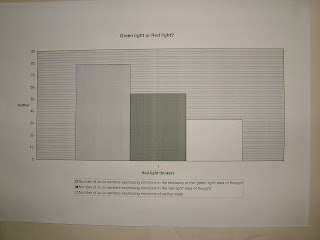 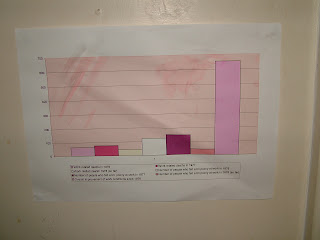 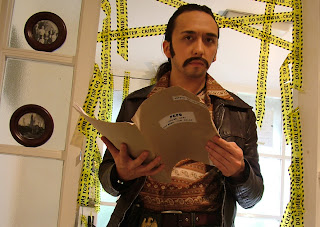 "Well it says in your report, 'He was hit in the face with some thing, some kinda weird thing, that blew his face clean off'"
Its the little things that count, and often the most fun, enjoyable props are the ones you take for granted when watching a no-budget comedy set in 70s America. They are the un-sung heroes, pivotal "plot" devices, hilarious set-dressing, and quite often invaluable to an extra who doesn't have any lines, but would like to look busy and  have something to hold on to.
The PCPD case filing system was designed quite early on so that when shooting fragments from different episodes, there would always be the correct case file on hand, filled with correct and appropriate contents. Most of which would never actually be seen on film.


And of course as different characters entered new stages of the investigation, more evidence would be added.
And when it came to building a full-sized, deliberately unrealistic corpse, no expense was spent. Many cardboard boxes were liberated, abused and hewn into a new and glorious form. 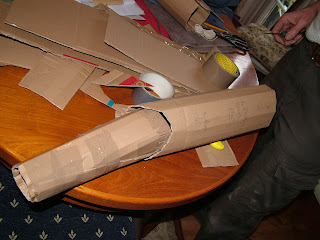 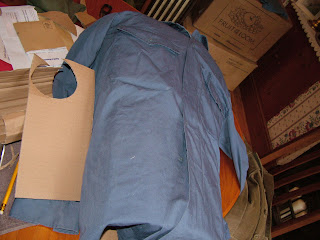 The highly detailed stand-in for Doyle would mean that the actor Alan Wadlan wouldn't have to spend many hours lying across a very uncomfortable brick hearth.

Among the other props in Doyle's flat were photos of Crash and Burn, a vintage Radiogram, and a collection of photos of Doyle throughout his career.

In every scene, there is a unique and unsual prop, or piece of set dressing, even the detritus that is needed to fill criminal dens, and sordid lairs are carefully crafted (often during the wee hours of the night) to be amusing and fit into the world of Patriot City.

Can you be the ultimate fan and spot them all?

More blogs coming soon...
Posted by Shields Of Justice at 07:34 No comments:

"And this? This is my gun, making sweeeet red-love, all over your faces. Ker-Pow!"

In one of the scenes in Shields Of Justice, Cop Killa literally illustrates his intentions to Crash and Burn, drawing them a picture using one of CK's signature props - his own brand of Cop Killa crayons.

These crayons were one of several items in the film, where Cop Killa was running his own self-promoted franchise. Unfortunately a lot of the items didn't make the cut.

One prop that suffered this fate is CK's range of gum.


Although Cop Killa had gum wrappers in his pockets for the entire film, they never appeared on screen. The only mention of them is in CK's Cop Killing commercial.

Cop Killa's Crayons did however make it in!


CK's brand of crayons were one of many bizzare items that featured in the film.  Who knows - if it ever takes off, maybe we'll even licence them ourselves!

Crash's distinctive look of all-American good guy was pieced together by layers of red white and blue.

While developing the character of Crash, Tom Hutchings looked to the performances of Adam West and William Shatner for inspiration. The result was a blue-eyed blend of broad smiles and ex-miltary heroism.

The first piece of Crash's costume to be sourced was his distinctive belt buckle, shaped to resemble the chamber of a five cylinder revolver, this was purchased very early in the production, while Crash's character was still being developed.


This was only the first step however, in piecing together his look, early costume tests for both Crash and Burn proved that every detail was important and soon the high-realism props began to appear replacing the early toy and plastic ones used for tests.

An original 70 jacket was sourced, in red leather which would frame the final costume. Crash's jacket features broad lapels, removable lining and unique panneling and venting, an item fit for a supercop.


A pair of womens flared jeans were added to Crash's costume as they had the correct shape for mens jean of the era. It was  decided that Tom's long hair would need to be replaced with a haircut which was altogether more 70s.


Following the new, and wholly 70s hairstyle, a reproduction 70s shirt was sourced and his personal items were slowly assembled. One of the various accoutrements Crash carries is his wallet; filled with photos of himself with his old mentor Doyle O'Flennegan, and of his murdered wives, his wallet also contains his warrant card and numerous notes and small change.


Alongside his Police Badge, Crash also wears the wedding ring of each of his four dead wives, who were visciously murdered by Scorpion Fandango, some of them more than once.

He also wears an original bianchi shoulder holster, for his 357 magnum.

The final look was thus:

Crash has always been on the right side of the law, but after the murder of his first, second, third, and fourth wife, for the second time, he learned that sometimes its ok to bend the rules in the pursuit of justice.

Often charming and intense, Crash usually stays focused on defined goals, using his creative logic to solve mysteries or get himself out of tight spots, but likes to enjoy himself along the way.

For more information on the back story of Crash, visit:

Crash's Bio
Posted by Shields Of Justice at 09:17 No comments: